Today, I took the Crazy Train to the mall to see Santa Claus. I tried to find a place that was a little less mall-ly, but with Christmas only one week away, I didn’t want 2014 to be remembered as “The Year Without Santa Pictures.” Rather than continue my fruitless search, we just went to the mall.

Although I acquiesced on the mall thing, I refused to get there via the interstate. So, in true Crazy Train form, we took the backroads. It’s about a 45 minute trip anyway, so why not make it a relaxing, traffic-free, scenic drive? My littlest kiddo needed a power nap before visiting with the Big Guy, so a short drive seemed like a good idea.

But today… TODAY I saw something I’ve never seen on Texas soil. What I saw today, I haven’t seen since my honeymoon in 2002 in the Scottish Highlands…
Today I saw a Heilan’ Coo. A HEILAN’ COO– IN TEXAS.

I didn’t realize there were Heilan’ Coos outside of the Scottish Mothership. I mean, I guess I never thought about it. I suppose I just thought they lived in the Highlands and nowhere else. Now that I type those words and think about it, I realize just how naive it sounds, but I guess it’s like picturing an American Buffalo anywhere other than the North American grasslands–it’s just not something you expect to see.

When I saw her, OF COURSE I turned the land yacht around to take a closer look. When we parked, we had the chance to chat with her owner for a few minutes and take a few pictures. It turns out that “Scottie” was a gift from a woman who was no longer able to care for her. Thankfully, Scottie is more of a pet, and not the alternative.

So, what’s a Heilan’ Coo? It’s a Scottish Cow– a Highland Cow. The Scots accent sounds like “Heilan’ Coo,” so it’s the way they actually write it. It’s pronounced “hee-lan coo.” And they are pretty awesome looking animals. The breed is perfect for the Scottish Highlands because they are hardy and well suited for the harsh, cold, rainy, and windy Scottish Highland climate. Their long, thick, wavy hair gives them protection against the elements, and they are especially adept at foraging for food in the steep, mountainous areas. They are excellent grazers, and they’ll eat plants that most other cattle won’t eat. That doesn’t really translate to the Texas climate or landscape, but since Scots and Texans are both badasses, I can see how this combination makes sense! 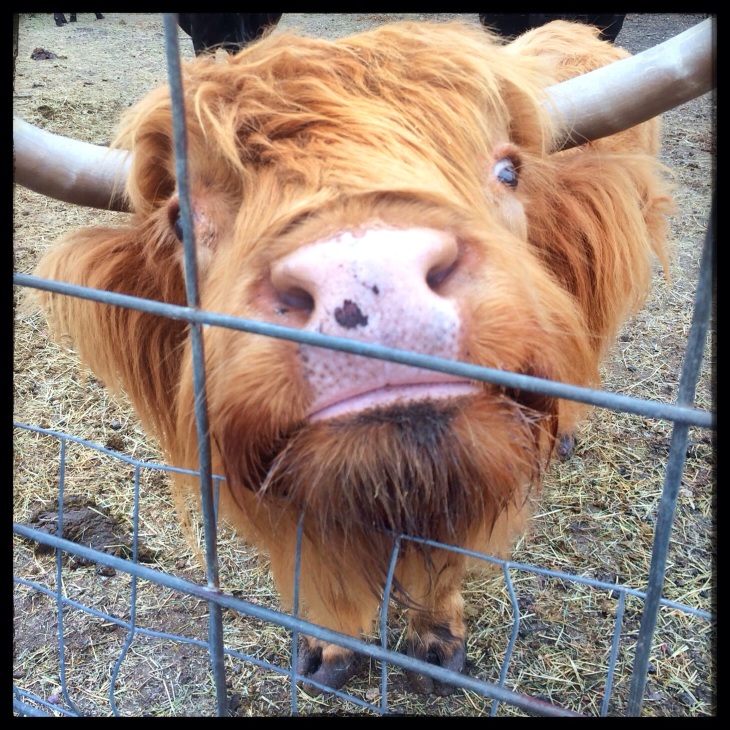 Scottie seemed like such a sweet coo. Since she is still relatively new, her owner didn’t want any of the kids to touch her, but she seemed to really enjoy the attention. She stayed close to us the whole time we were there, and she followed us to the car and gave us a sad, pouty, coo frown when we left. I’m thinking it’s good that we don’t own acreage or we might also own a coo right now too!

Since Scottie is a pet, and since I live in a dreamworld where delicious hamburgers and brisket come from a magical place called the “meat market,” we’ll just end our Heilan’ Coo lesson there. Enjoy.