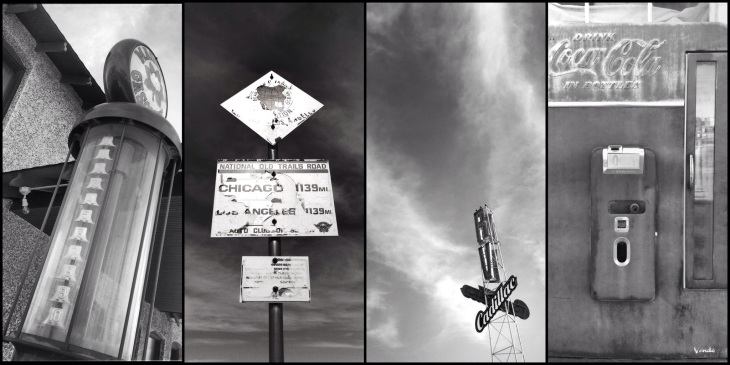 When we decided to go up north to Route 66, I was really, REALLY excited. Not because I’m a history nerd, but, for all y’all who don’t know me, I’ll give you a partial autobiography of the Crazy Train’s navigatrix.

Primarily, I am a photographer. As far back as I can remember, I usually had a camera with me. So when I joined the yearbook and newspaper staff in high school, toting a camera was nothing new. I majored in Photocommunications at St Edward’s University in Austin and afterwards, began (but never completed) an MFA in photography (someplace else). While life took me in other directions, photography was always my touchstone. After having kids, I dabbled in family portraiture, but that’s just not my wheelhouse. (Environmental portraiture, yes, this stuff people do today? Not so much. I jokingly call myself a MWAC to my photo friends, and they just laugh at me, saying if anyone is NOT a MWAC, it’s me.)

To get to the heart of my love of photography, you don’t go back to my roots–I started too young for that. You can’t really even go back to the first years where I started to explore in photography. But if you go back to college where I first learned about the specific artistic movement that would grab me and bring out the artist deep within me, then you see why the idea of Route 66 was so exciting.

It was during my studies in photocomm at St Ed’s that I first learned about the art of documentary photography and the photographers of the Farm Securities Administration (FSA). It was from my professor, photographer Sybil Miller, that I learned how photography, quite literally, changed America.

The (FSA) was created in 1937 (an evolution of the Resettlement Administration) in the US Department of Agriculture as a part of FDR’s New Deal. From 1937-1944, the FSA became famous for its small, but highly influential, photography program. Economist Roy Stryker headed up the Information Division of the FSA and launched the documentary photography movement. Though not a photographer himself, Stryker understood the power of the photograph and promoted the camera as a tool to document society. In an age before digital manipulation, TV, and the 24-hour news cycle, a photograph provided solid proof of the conditions and the details in which so many Americans lived.

Stryker had a knack for attracting top-notch photographers and for getting the best work from each one. He sent them into the field fully prepared for what they would encounter, and they all knew that an educated, sensitive, understanding, and compassionate photographer could effectively transfer the feelings and emotions of an otherwise silent portion of our population onto film, and in doing so, could cogently share those feelings with the rest of the nation. He was responsible for launching the careers of some of the most gifted and influential photographers in American history. Walker Evans, Dorothea Lange, Gordon Parks, Russell Lee, Arthur Rothstein….

FDR’s Brains Trust underestimated these photographers’ ability to produce images that breathed life and emotion and art and empathy and truth into the era. The eleven photographers who worked on the project took on this task of “introducing America to Americans,” and produced approximately 250,000 images– half of which still survive today in the Library of Congress. It wasn’t until these photographs were introduced to the nation that America really understood the depth of the Dust Bowl, the Depression, and the plight of the American migrant farmer.

But, time marches on, and, to my disappointment, it has trampled all over Old Route 66 like a steamroller over a flowerbed. Texas is usually wonderful about preserving our historical places, but this was not true for the 178 miles of Texas’ portion of “The Main Street of America,” the road taken by hundreds of thousands of Americans during the 1930s. This legendary road that follows the path of Native Americans, conquistadors, cattle and oil barons, cowboys, and Dust Bowl refugees has been replaced by US40, and is mostly unmarked (as Rt66). The iconic signs are gone, both from the road and from many of the places that made it famous. (Route 66 is the ONLY National Highway to be decommissioned from the original 1926 grid created by the US Highway System. Shameful.) The landmarks have all but disappeared. And, without a doubt, our stretch of The Mother Road will disappear into myth and lore, replaced by something newer, something better, and sometimes, by nothing at all. 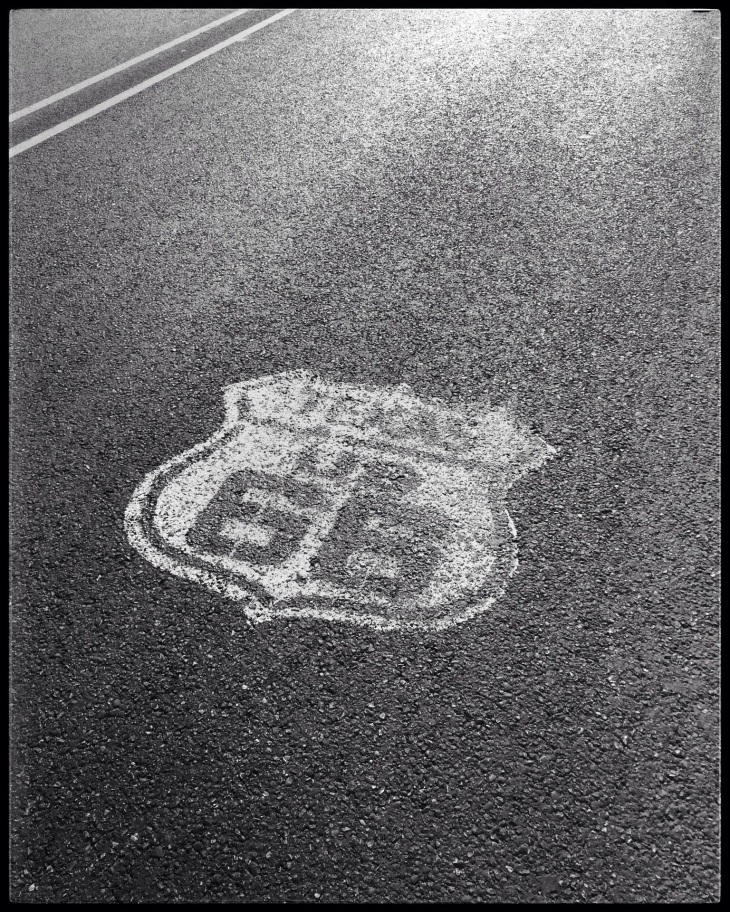 As we detoured to the east on Hwy 287 from Quanah towards Chillicothe en-route to what was promised to be the COOLEST ghost town in Texas, I turned to the almighty interwebs for information on where we were. The natural wonder we were approaching was a fantastic diversion along the way.

In southeastern Hardeman County is a line of four cone-shaped dolomite mounds, the erosional aftermath of the Permian Age (225-270 million years ago). Flanked to the west by a washed-out ancient buffalo trail and surrounded on the other three sides by rich cotton and grain fields, these giant hills (the tallest is 350′) seem to come out of nowhere in the otherwise flat land. 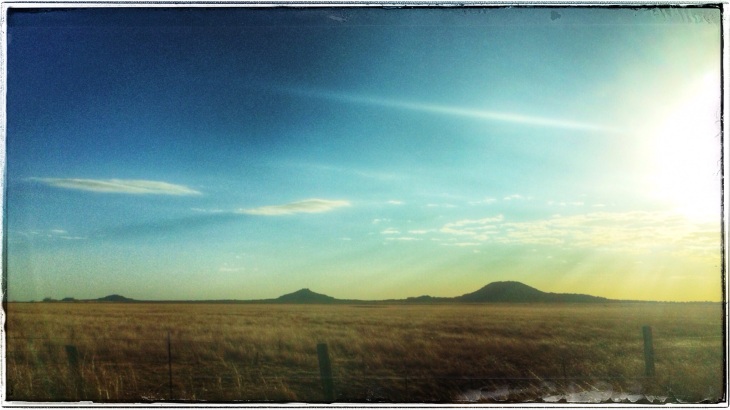 The Commanche Nation believes two of the four (the tallest two, Medicine Mound and Cedar Mound) to be sacred ground, and since the late 1700s have come here to drink the healing waters from the gypsum spring, gather medicinal plants and herbs, and communicate with nature and the spirit world. On a clear day, they say you can see more than 60 miles from the top of Medicine Mound. It is also believed that a great and powerful benevolent land spirit resides at the flat cap-rock atop Medicine Mound, and communing with the spirit at this powerful place would cure ills, assure successful hunts, and protect them in battle.

Today, the Medicine Mounds lie on a 2,600 acre private ranch owned by the Summerlee Foundation in Dallas who not only safeguards it for historical research and wildlife preservation, but also allows the Commanche Nation use for spiritual purposes. Pretty awesome.
The vibrant colors and the speed at which the light changed out here was fascinating. It was VERY windy and VERY cold. Ear numbing cold. Hair frying everywhere cold. But there was no time to waste, so I took what I could while we sped to our next stop. I love the colors up here!

Just north of Abilene, Texas on FM600 lies the remains of Ft Phantom Hill, a little gem of a ghost town that began in the early 1850’s to protect westward moving settlers from the Commanche. 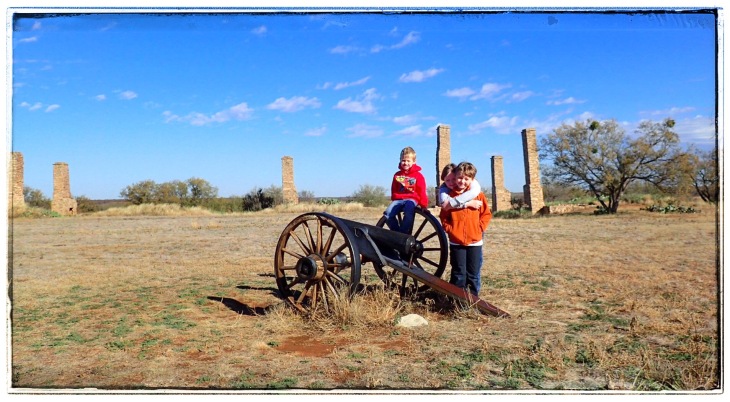 The Fort is at the Clear Fork of the Brazos River. It was originally planned for Elm Creek, but a new general, changed the plan. This new spot had brackish water, no wood for construction, and…. isn’t that enough? They hauled in stone from Elm Creek, 2mi away (ironic, huh?) and brought oak logs from about 40mi away.

Though never officially named, the Fort was referred to as “The Post on the Clear Fork of the Brazos.” (But I bet the soldiers called something more colorful.) The name “Fort Phantom Hill” refers to the apparitions inhabitants have claimed to have seen there from the start.

Life at the Fort– for lack of a better word– sucked. Elm Creek (2mi) was often dry. The Clear Fork’s water was brackish. The 80ft well was unreliable, and hauling water from a spring 4mi away (again) SUCKED. With this water supply, gardens couldn’t be kept and the men got scurvy, fever, pneumonia, and dysentery. The most common pastime was desertion. They say the ONLY positive thing about the Fort was the view.

Since virtually all Commanche encounters were peaceful, the Fort was abandoned in 1854. As troops left, the Fort was ablaze. The official report was that the Indians set the fires, but it was more likely the soldiers torched it in celebration. 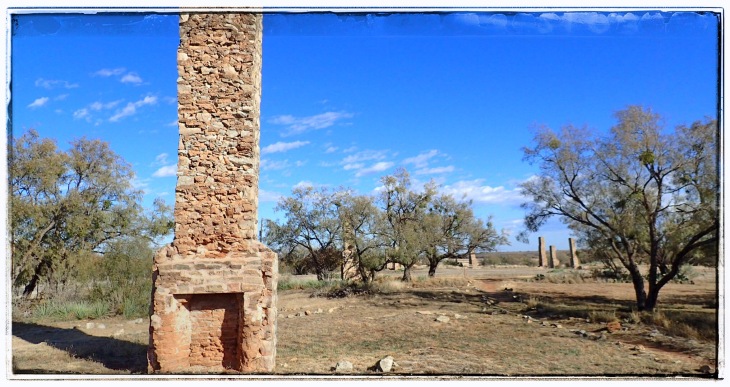 In 1858, the structures were repaired so they could be used as a way-station for the Overland Mail Stagecoach Line. In the Civil War, it was used as a field ops base, and in 1871, it was a sub post of nearby Ft Griffin. In 1876/77, it was a buying/shipping point for buffalo hides, and by 1880, the town that had sprung up had over 500 residents. Jones was named County Seat, but 6mos later, County government had moved to Anson and the Texas & Pacific Railway was routed 14mi to the south, thus ending the run of Fort Phantom Hill.

In 1928, the site was bought by private interests, and in 1969 it was deeded to the Ft Phantom Hill Foundation to ensure its preservation.

Today, it’s one of Texas’ most pristine historic sites. Strolling among the dozen or so chimneys and buildings on the 22 acres is a spiritual experience. Entrance is free, and they have brochures and clean bathrooms. Everything is clearly marked. Don’t trust your GPS or any addresses or other directions. The site is about 15-20 minutes up FM600 from Abilene. Just keep your eyes open and you’ll see it. If you miss it, you’re not paying attention.

Don’t miss it. It’s a fantastic piece of history.

Oh yeah. If you want a family photo, bring a tripod. Finding things to make a camera stand was NOT easy. I couldn’t even find stuff to raise my fancy-schmancy little candy apple red picture making magic box… I can’t imagine trying to find stuff to build a FORT! 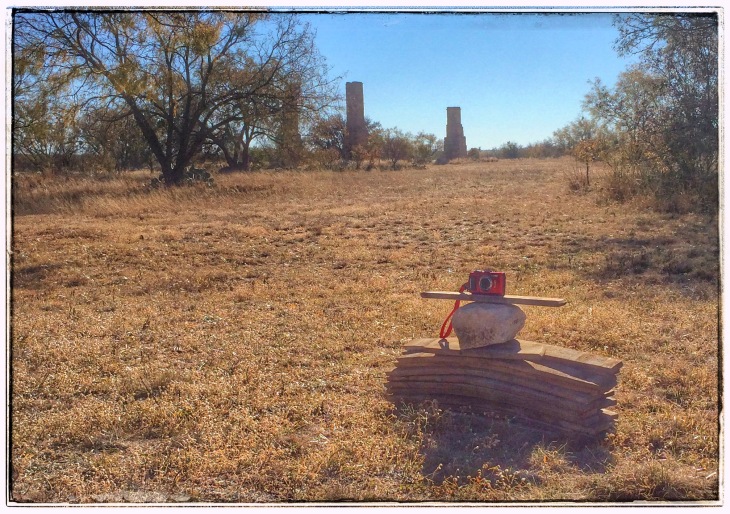 Take only pictures,
Leave only footprints,
Keep only memories,
Kill only time,
Waste nothing,
and
Always leave a place
better than you found it.