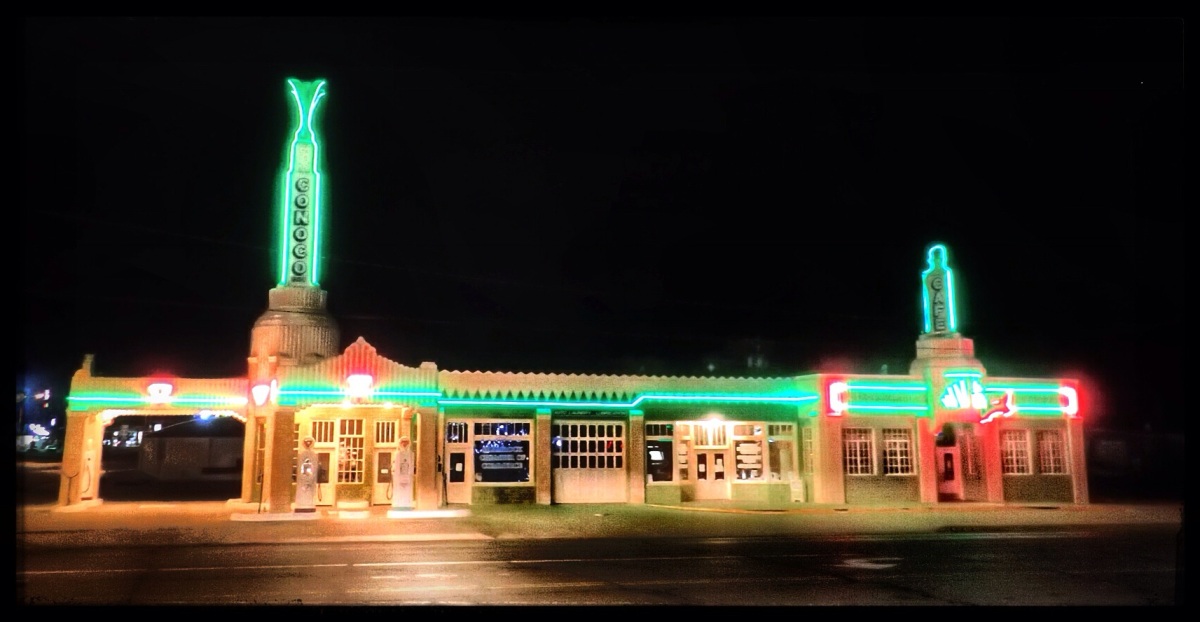 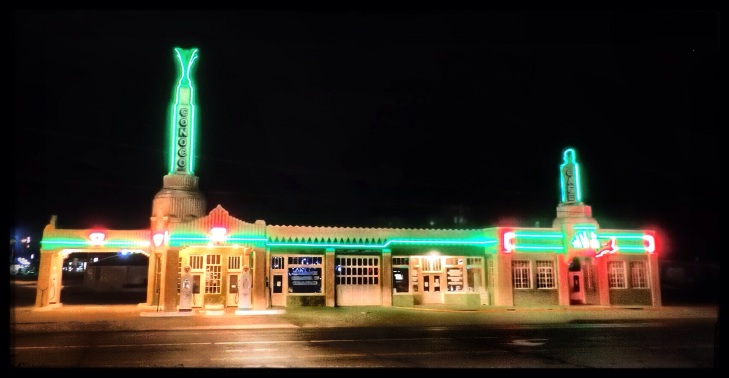 But, the post office never opened due to a fire in Nickel’s dugout. Mary R Jones served as postmistress at a nearby location for a few years, and amid a fury of flip-flopping names, post office closures, relocations, and re-openings, the railroad arrived. In 1903, the Luck of the Irish prevailed when the Chicago, Rock Island and Gulf Railroad chose to name the stop Shamrock. The rest is history.

It wasn’t long before people arrived in the newly incorporated town. Shamrock really started to flourish when a water main was laid in 1923, eliminating the need to import water. Over the next few years, water wells were dug and oil and natural gas were discovered, ushering in the next population boom. 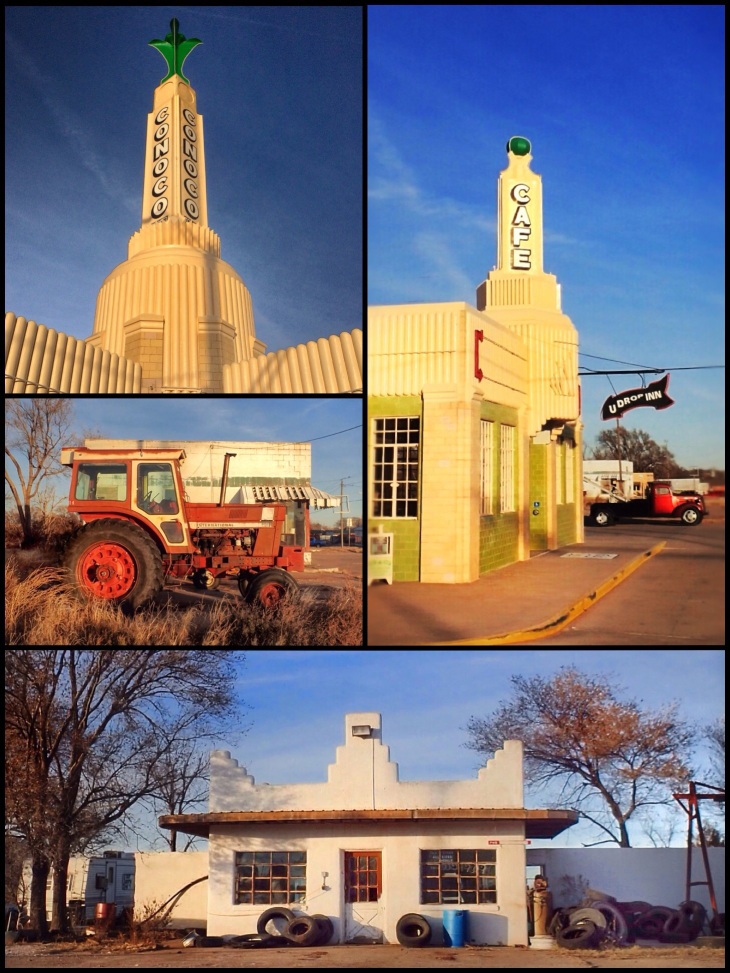 I’m not sure if y’all have done the math yet, but I hadn’t. So, I’m going to give you a hint—there’s a HUGE oil and gas company named for this town. (Hello McFly! Yeah, I felt kinda stupid.) The Shamrock Gas Company provided ample fuel, and other companies took care of the rest. Shamrock suffered some with the oil industry’s decline in the 1930s, but improvements to Route 66 (which came through the middle of town) helped Shamrock bounce back. But, when I40 bypassed Shamrock, many businesses closed. 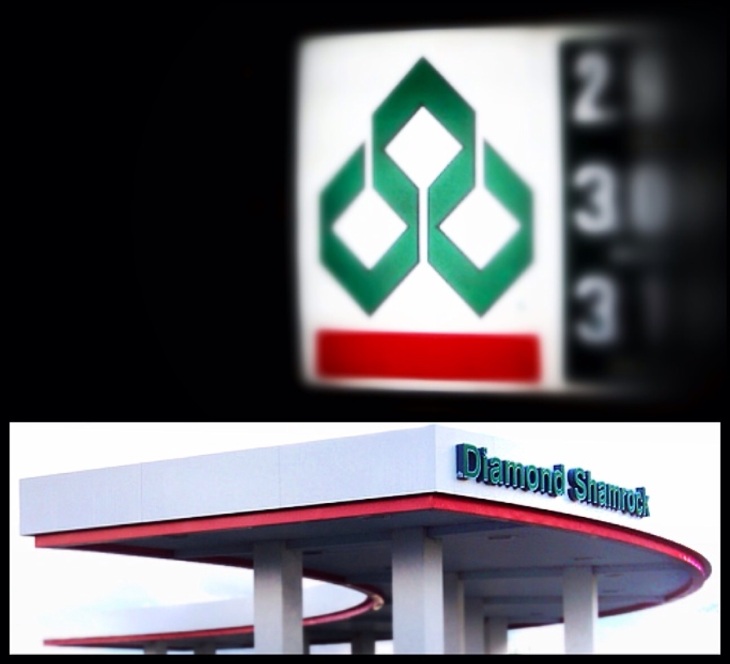 Unlike many other Rt66 towns, Shamrock has continued to grow with steady cattle, petroleum and agricultural industries. In 1938, the town had its first St Patrick’s Day celebration, an event that—after more than 75 years— draws in thousands annually. Shamrock also hosts the annual Eastern Panhandle Livestock Show.

But, NONE of these are the reasons The Crazy Train made the trip to Shamrock. We blew into town on that breezy Wednesday afternoon for a totally different reason entirely.

In 1936, a guy named John Nunn drew up the plans for a filling station in the dirt with a rusty old nail. The plans were later given to an architect and for $23K, the Crown Jewel of the Mother Road was born. 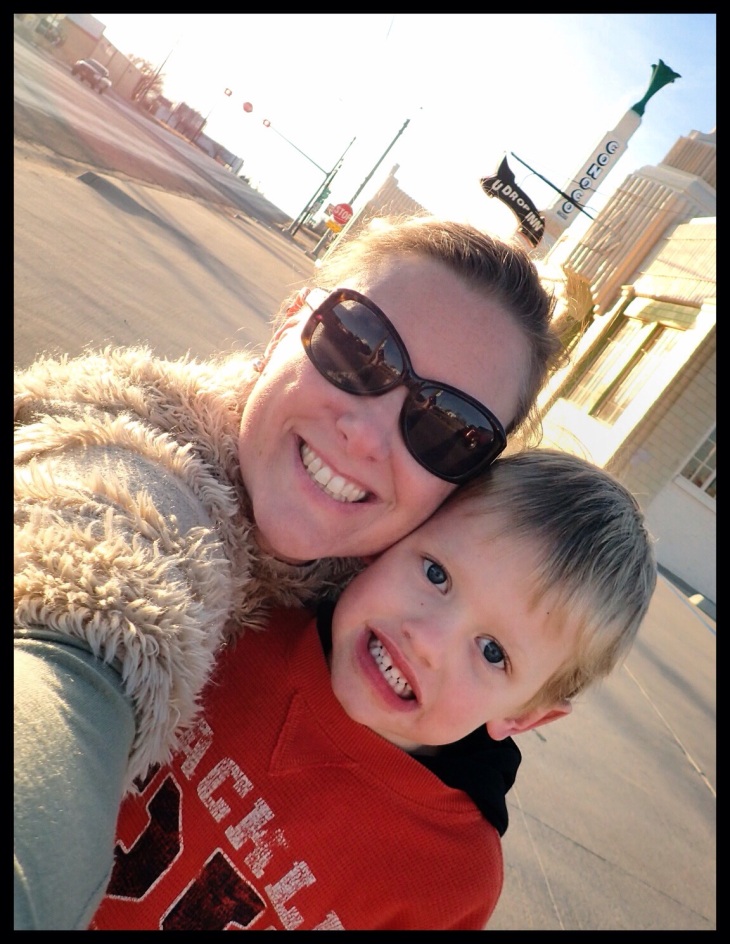 You see, like I said before, many of the locations depicted in the Pixar film Cars were based on real locations. But ONE location was copied almost exactly. The Tower Station and U-Drop Inn Café became Ramone’s Body Shop. And in Shamrock, the beautiful art deco structure has been magnificently restored to its original glory. My Cars fans rejoiced when they laid eyes on it. The Tower Conoco Station with its flat roof and tulip top was everything we hoped it would be…. everything EXCEPT open. Yep. They closed for Thanksgiving week, so we could only press our noses against the glass. Today, it’s owned by the City and is on the National Register of Historic Places. The place had a hard life being passed from owner to owner, living different lives for decades before it was foreclosed on by the bank and then gifted to the City. This gesture by the First National Bank of Shamrock does my heart good and restores my faith in the goodness of some businesses. Thankfully, we ‘d planned a night in town, so we were happy to find the neon was on a timer, so we got to enjoy the beauty of the building both all lit up at night and during the day.

I could walk around the outside of a building for hours. I could photograph the nooks and crannies of a historical structure until even my camera was bored. But, the Crazy Train will only humor me for so long before they force me to pack it up and call it a day. The art deco décor, the tulip adornment, the glazed terra cotta with decorative green and gold tiles of the U-Drop Inn…. The geometric detailing, the curves, the neon outline… I was in my element. But the Crazy Train was hungry, and the masses needed to be fed! 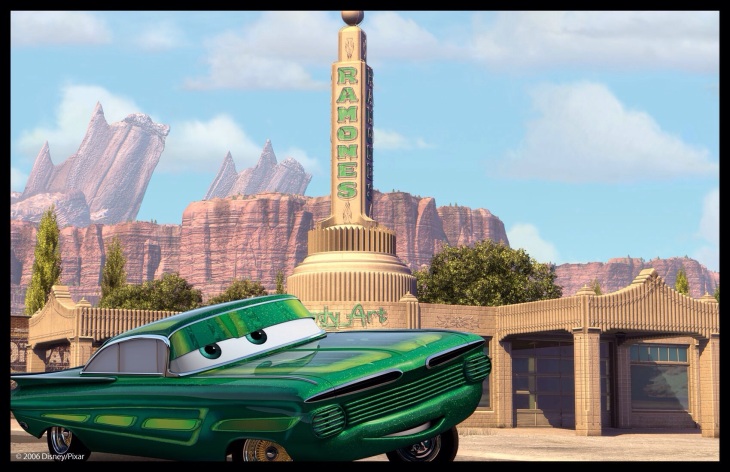 The kids were delighted with Ramone’s. I mean the Tower Station. It was a pity that they closed up before the holiday because while we were roaming around, taking pictures and soaking up the ambiance, several cars with disappointed kids in their backseats slowed down and saw the closed sign and kept driving. During the hour we were there, I counted eight cars who would’ve stopped had it been open.

I was surprised to learn that Shamrock had such a thriving population. Although we arrived the day before Thanksgiving, we were surprised at how deserted the town seemed. There weren’t many places open for business (or that would be open on a regular day) and there seemed to be a lot of abandoned structures. The Tower Station and U-Drop Inn was beautifully restored, and there was a Magnolia Station that had also been restored in town, but the other historic buildings seemed to have been forgotten.

But, all that aside, we really enjoyed it. It was probably the highlight of the 4-year old’s day. He was a bit curious about where Ramone was, but when we talked about it, he understood that the movie just copied this place, and that it was kind of a cool thing to see.

It was definitely worth the trip, but we would’ve loved to have spent a little cashiola on some souveniers! On the Crazy Train scale of must-see-spots, this ranks way up there. But, make sure they’ll be open before you make a trip. And, put some other things on your itinerary while you’re in that neck of the woods, because unless you’re hard-core history nerds like we are, the Route 66 Trail through Texas can be a bid underwhelming. That being said, I still want to go back. Soon. 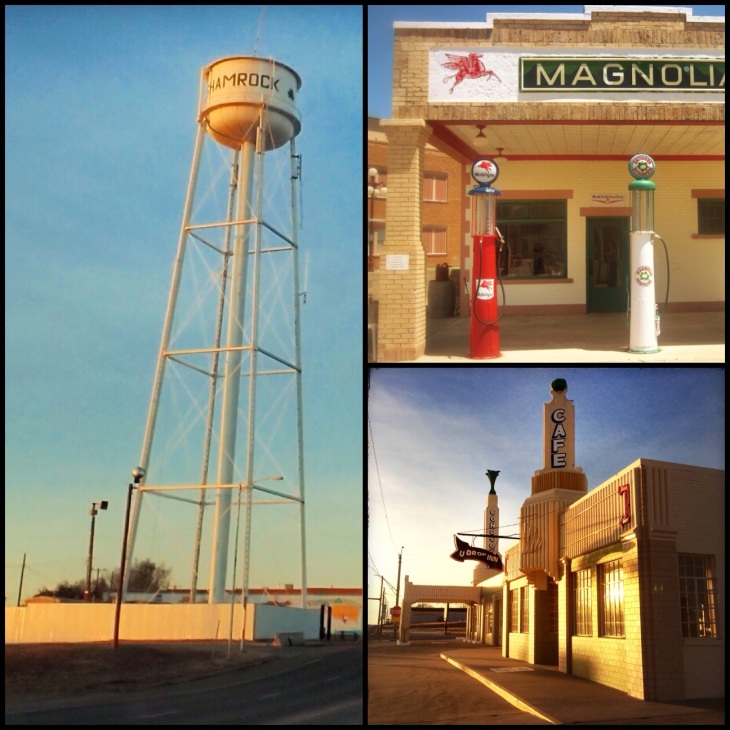 Remember how I said that I was disappointed in how Texas has failed to maintain much of our Rt66 history and landmarks? (See post “Preface to Route 66.) Here’s what I meant: 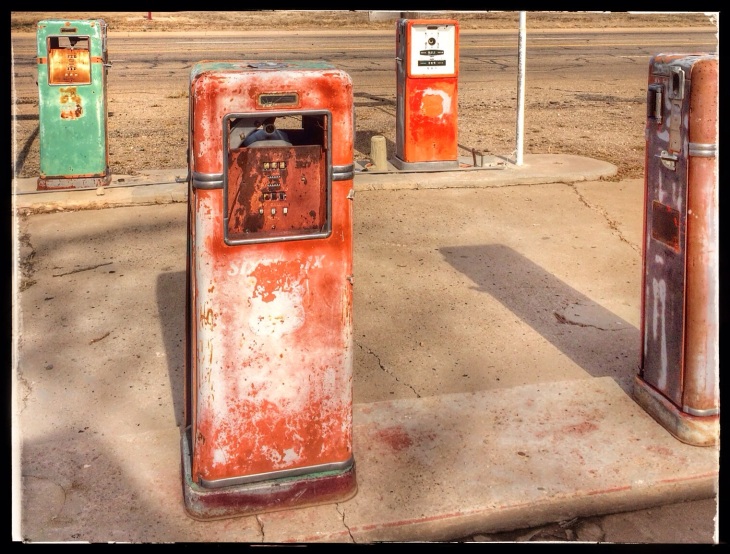 Among the disappointments on our Rt66 journey was our trip west of Amarillo to the towns of Adrian and Vega. Adrian is also known as “Midway” or “Midpoint” because it is EXACTLY half-way between Chicago and Los Angeles on Rt66–1,139 miles to either. And, we were excited to learn that the inspiration behind Flo’s V8 Cafe in the Pixar movie “Cars,” had been none other than the Midpoint Cafe in Adrian, Texas! We knew the cafe itself didn’t look like Flo’s but we’d heard that the owner and the inside were pretty awesome. Rt66 memorabilia was on display in the 1950s-esque diner, and the owner was reportedly the inspiration for FLO HERSELF! “Cars” fans in the backseat rejoiced in excitement! 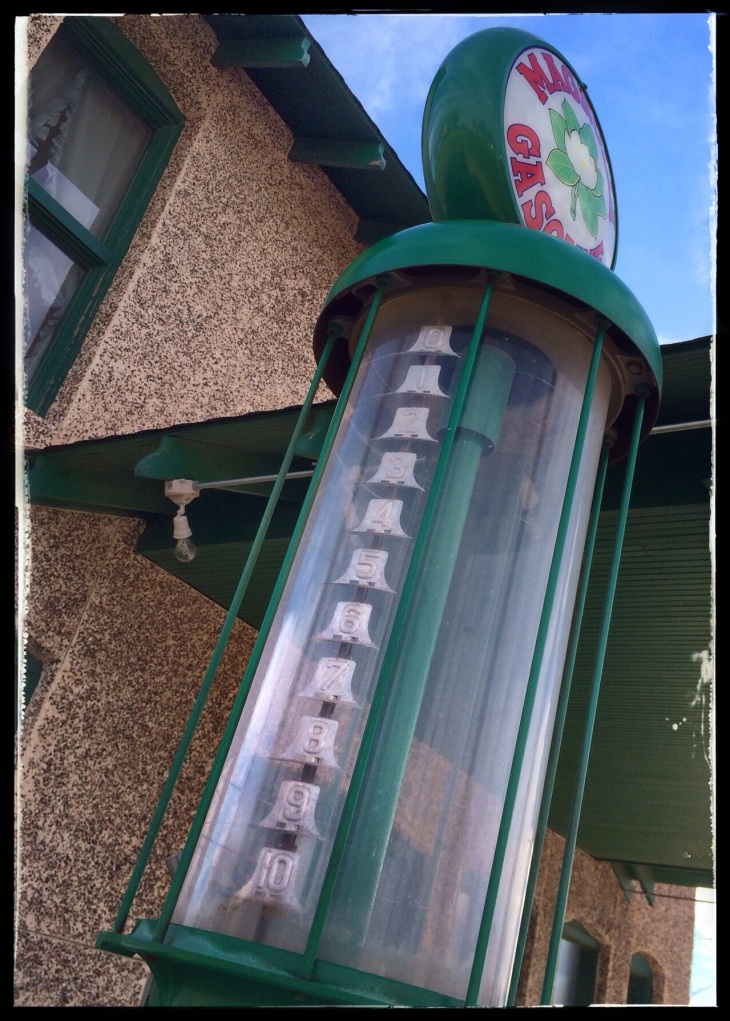 After leaving Cadillac Ranch, we went west, first to Vega. We saw some of the old neon signs– which, we learned, is what mostly remains of the Mother Road. We parked at the Courthouse and used their facilities to try to scrub the spray paint off the kiddos. No dice. My boys were blue. The paint wasn’t coming off. So we checked out the old restored Magnolia Station (pretty cool) and then headed across the street to Roark Hardware. Of all the places we stopped on our trip, Roark Hardware has got to be filled with some of the nicest people we’ve met. Not only did we want to see the oldest operating hardware store on America’s Main Street, but we needed help getting the paint off the boys. The shop was pretty neat. Filled with modern hardware items as well as some cool vintage stuff on display, Roark’s looked a lot like an old-time general store. Everyone jumped in on helping us find a way to un-paint the boys, and when we wanted to BUY the supplies, they were surprised that we didn’t just want to use some! We insisted, and left with clean kids and a happy feeling because we LOVE supporting small business. 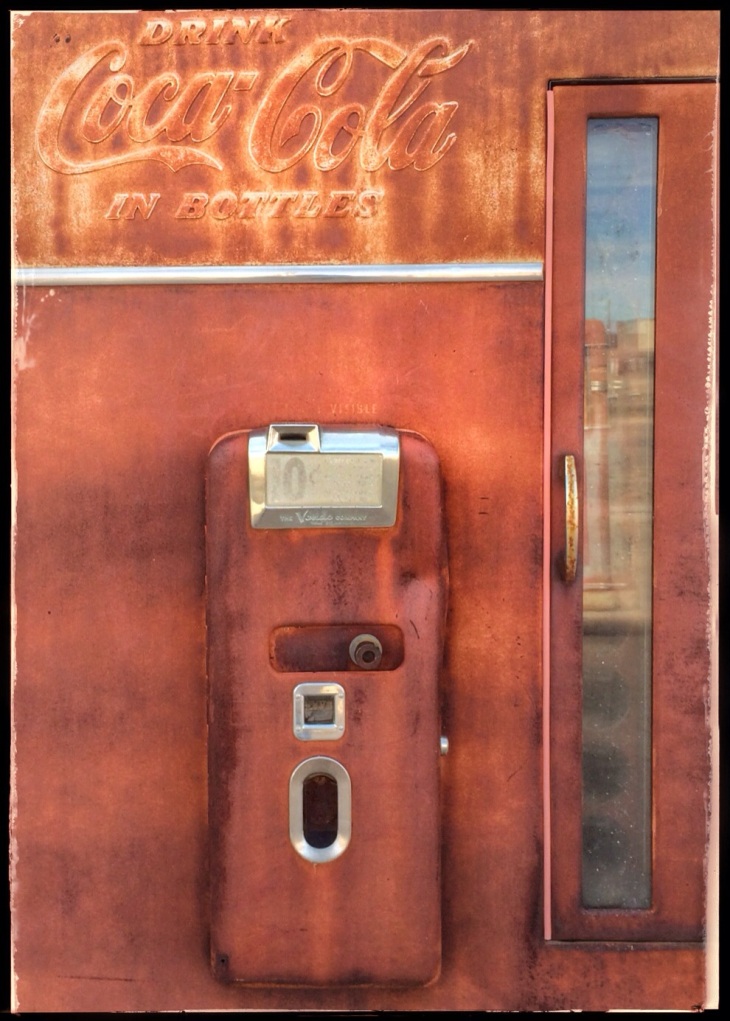 However, our joy was short-lived. Everything else in Vega was closed! Every Rt66 attraction we’d read about, every place our new friends at Roark’s recommended, everything on Trip Advisor and Yelp and our Rt66 app…. Closed. We passed up the restaurants because, well, the Midpoint Cafe was just a few miles down Rt66. So, we took some pictures around the Magnolia Station, and made our way west to Flo’s. I mean The Midpoint Cafe. 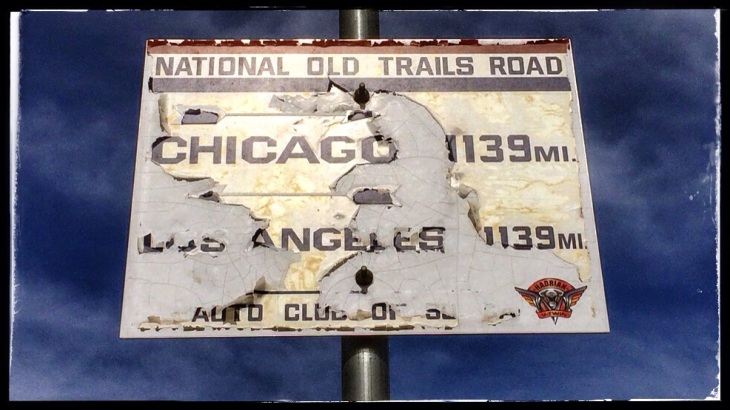 When we arrived in Adrian, we were a little surprised. (We have since learned that ANY town with a population of less than 1,000 is more than likely to be pretty sparse, so make a note for future reference!) As our second “destination city” on Rt 66 (after the county seat in Vega), we weren’t prepared for a virtual ghost town. After all, the online sites boasted 12 local businesses, a population of 150, and the Midpoint Cafe! We passed by the Bent Door Trading Post– Closed. The Antique Ranch– Gone. Tumbleweed actually blew across the road in front of us. Yet, optimistically, we pressed on. As we pulled into the parking lot at the Midpoint, our optimism quickly turned to sadness. It was closed. Closed. For the season. The handwritten sign on the door said, “Closed for the 2014 Season! SEE YOU IN JANUARY!” Sigh… (See note at the bottom.) 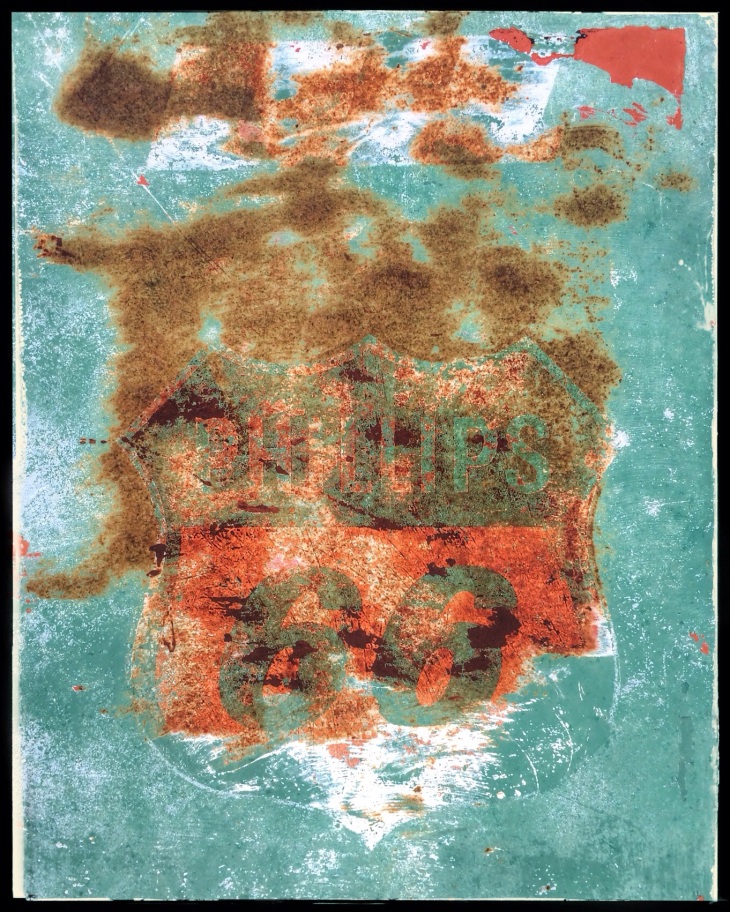 However, we did take a little “scenic” drive through the town of Adrian, and saw some hilariously strange road signs. Since they were mostly in people’s front yards (and residents looked at us like we were nuts for cruising through the residential area) I didn’t snap any pics with my Professional Fancy Candy Apple Red Picture-Making Magic Box (or the iCheese). But now I regret it because NOW I know these were some of Stanley Marsh 3’s bizarre road signs, erected in tribute to the eccentric millionaire when he died this past June. HINDSIGHT PEOPLE!!! DO YOUR RESEARCH!!! I SHOULD’VE BEEN PREPARED! 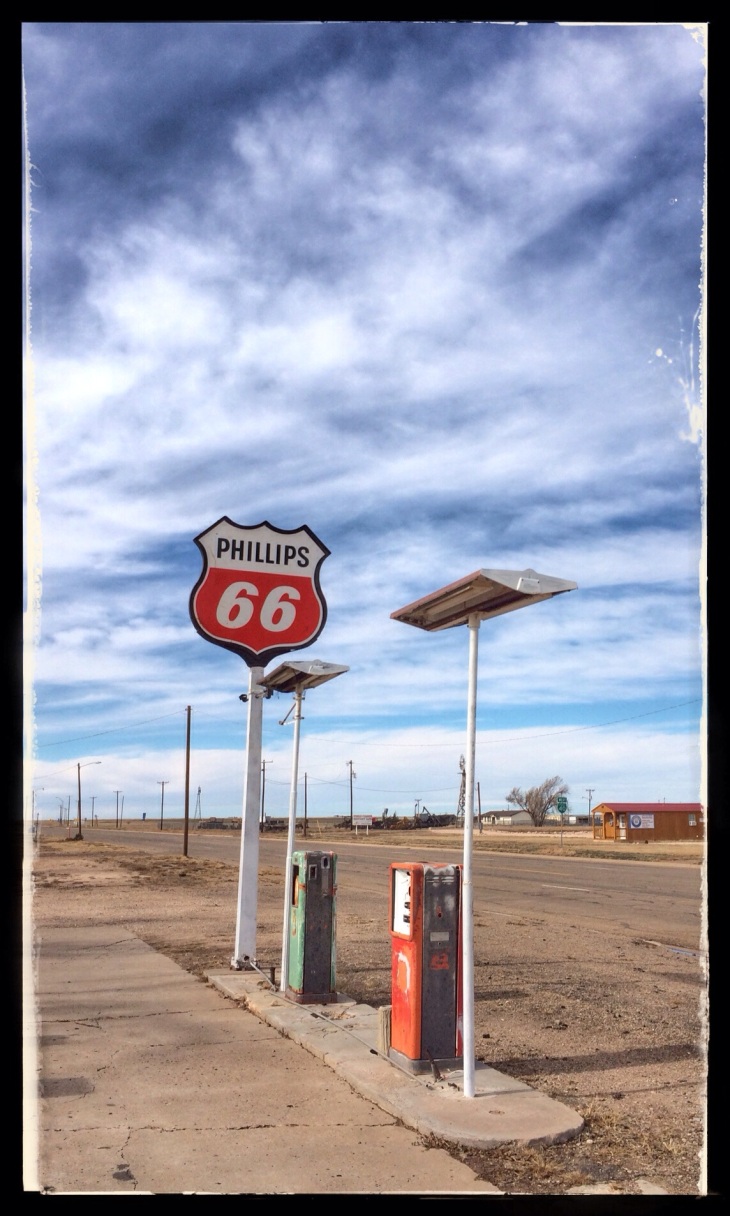 And, well, I did enjoy the Bent Door Trading Post, even though it was closed. I jumped out and took some pictures (and poked around, like I love to do in old, broken down, scary-looking, dilapidated, ghost-town looking buildings). There was some interesting “rusty gold” as Mike and Frank on American Pickers say, and the gas station fixtures out front were pretty neat. Not to mention the cool front door, which is, in fact, “bent,” as the name implies. It was originally a cafe, souvenir shop, and gas station. Built in 1947 by Robert Harris, it was actually called “Midway Station,” but everyone just called it the Bent Door Cafe” because the recycled doors and windows from a WWII USAF watch tower were “bent.” In 2009, the name was officially changed to “The Bent Door.” It had been saved from demolition, and I’d read that it was in the process of restoration, but, unfortunately, I could see no trace of this when we were there. Sad. 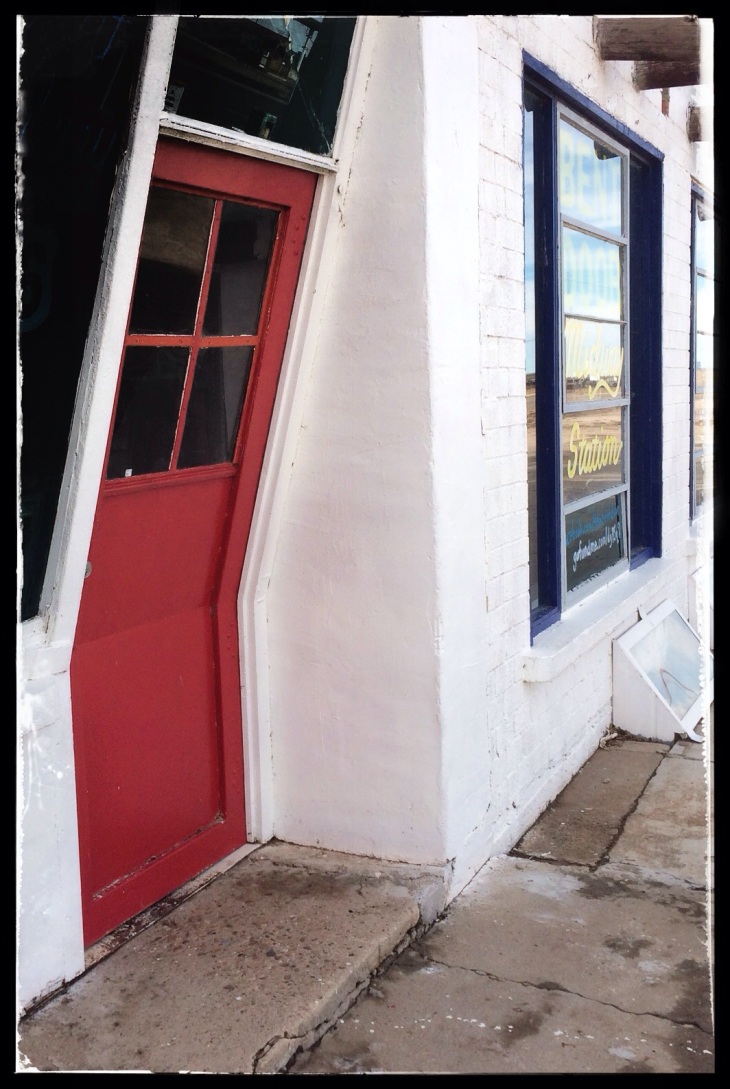 Unable to take any more disappointment, we turned the SSPhelps around and did what the Crazy Train does best….. We implemented PLAN B! The kids were STARVING (my sarcastic emphasis because apparently, the all-you-can-eat free waffles at the hotel couldn’t have sustained them for another half hour so we could see the TX/NM border) so we turned around and headed back to Amarillo, sights set on the infamous cheeseburgers of the Golden Light Cafe– CONFIRMED to be open and ready to flip some burgers!

(END NOTE: Since we are HUGE proponents of mom and pop businesses, we applaud their decision to take a vacation! One of the best things about owning your own business is having the choice to open whenever you want. Now, we know that if there is a specific place on our “must go to” itinerary, we need to call ahead and check on the hours! Kudos, Fran Houser, for taking the holiday season off! We hope we can catch up with you next time!)