Whenever I get a superlative case of the vapors, and miasma brings along coryza, the grippe, and quinsy, or I need relief from my lumbago, lethargy, the ills of overconsumption, or female hysteria, I just need to take the waters. Since Texas is lousy with sulphuric-rich mineral waters, you’d think easing nervous tension and dyspepsia with some old-fashioned balneotherapy, promenading, and repetitive quaffing of foul-tasting water would be a piece of cake, but no dice. There ain’t a single mineral spa in the Lone Star State where a girl can relax for a few days of massages, hot mineral baths, drinking stinky water, and socializing. 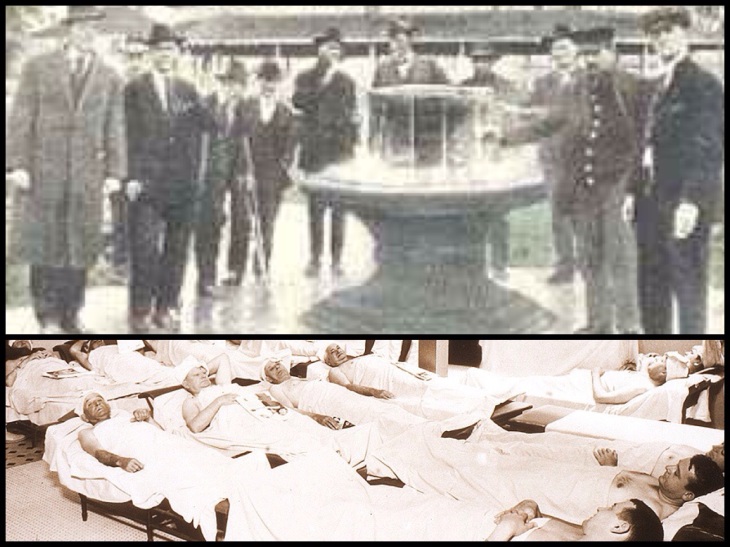 Most people speeding up and down I35 pass the Marlin exit with little more than a glance. I mean, really? A landlocked town in Central Texas named for a big saltwater fish? Hmmm…. Sounds, well, fishy.

Marlin is one of those dots on the map you’ve probably never heard of, but who’s history will surprise you. It wasn’t named for a fish, but for John Marlin, an early pioneer and Texas patriot who settled nearby in the 1830s. Marlin was incorporated in 1867 and became the Falls County Seat, guaranteeing its initial growth. Then the railroad came and people followed. By 1892, there were 2,500 residents.

But that was nothin’. It was around then that a surprising discovery put Marlin on the map, making it one of the top tourist destinations in the state.

No. I’m not kidding.

In 1892 while digging for an artesian well, a hot, sulphur rich mineral spring was discovered. Rumor has it that 174° water shot 75 feet into the air. In the late 1800s and early 1900s, mineral spas were all the rage, so a medical/resort town sprung up (pun intended). Before “germ theory,” antibiotics, and sulfa drugs, doctors thought “taking the waters” was a cure-all for whatever ailed you. All that stuff I said earlier would’ve been cured by taking the waters. Miasma (that “something funky” in the air that caused sickness) like coryza (a cold), the grippe (influenza), and quinsy (tonsillitis). The waters also cured lumbago (low back pain), lethargy (exhaustion), the ills of overconsumption (hangover), female hysteria (PMS), nervous tension (stress), and dyspepsia (tummy-ache), arthritic, and most skin diseases. Remarkably, some physicians claimed it could cure liver disease, mental disorders, and cancer via osmosis during balneotherapy (soaking in the stinky water) and by drinking it.

Hotels and sanitariums went up everywhere. A hospital, various clinics, a “crippled” children’s clinic, and a pavilion with public fountains and a foot bath were built. Tens of thousands of people flocked to Marlin to take the waters ever year. Some say as many as 100,000 visitors a year came to Marlin to take the waters. The Cincinnati Reds held their spring training in Marlin in 1907, and from 1908-1918, the New York Giants (now the San Francisco Giants) called Marlin home. Legendary Baseball Hall of Fame player and manager John McGraw batted left, threw right, and swore by the healing waters in Marlin. Did I mention that the Giants won the Pennant in 1911, 1912, and 1913? See? Magic water!

When the stock market crashed in 1929, a grand, nine story hotel on Coleman Street was only half completed. The Crash had little effect on Marlin. In May of 1930, the 110-room hotel, which featured a ballroom that could hold 300 guests and an underground tunnel to the Marlin Sanitarium Bath House, became the eighth hotel opened by Conrad Hilton. Yeah. That Hilton. 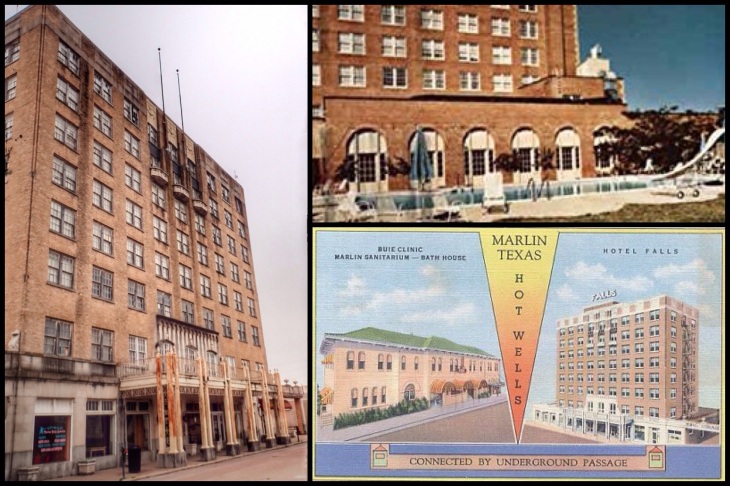 Though Marlin held on longer than most mineral spa towns, science and circumstance finally caught up with them. Fires in some of the hotels and spas forced their closure, and advancements in medicine made rebuilding them seem inappropriate. The extravagant claims made by charlatans (eg. sulphur baths as a cure for cancer) annihilated their credibility. Some clinics held on through the 1960s because they incorporated hydrotherapy into a physical therapy tool. But eventually, the stink water craze went bust.

Sadly, the town of Marlin is a ghost of what she once was. Marlin is by no means a ghost town, but time hasn’t been kind to this former resort town that once hosted hundreds of thousands of health-seekers. Various murals boast snapshots of the once-vital spa town. Virtually nothing was open on the Saturday of our visit. Keith’s Hardware is one of Marlin’s oldest continuously operating businesses– housed in an awesome 114 year old building. Keith’s employs some awesome people who graciously showed us the massive pulley and lift system that was used to hoist buggies, wagons, farm implements, stoves, and furniture up to the third floor over a century ago. The ghost sign on the building’s west side still stands testament to the history contained within. 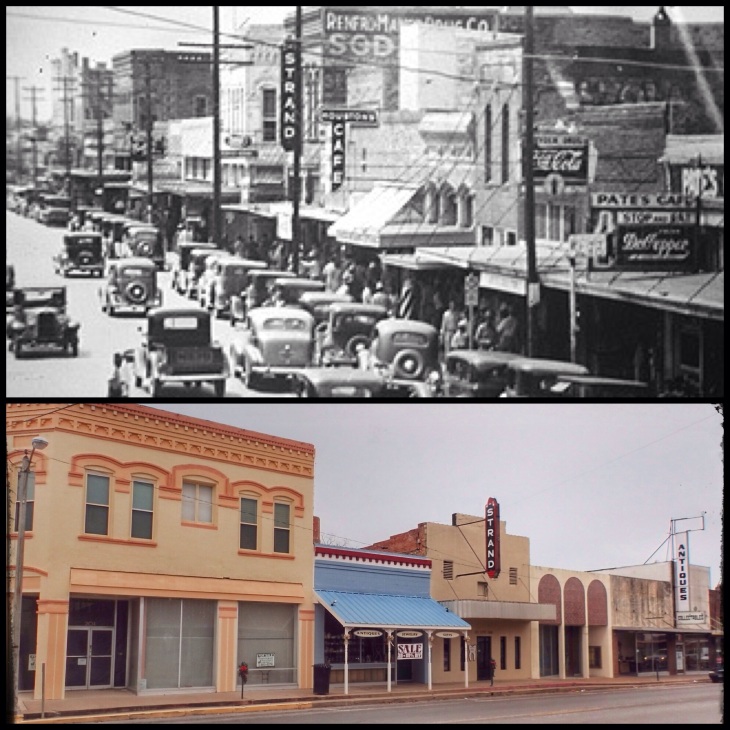 The only place to take the waters in Marlin these days is at the Fountain Pavilion adjacent to the chamber of commerce. All that remains is a small marble fountain and an empty foot bath. 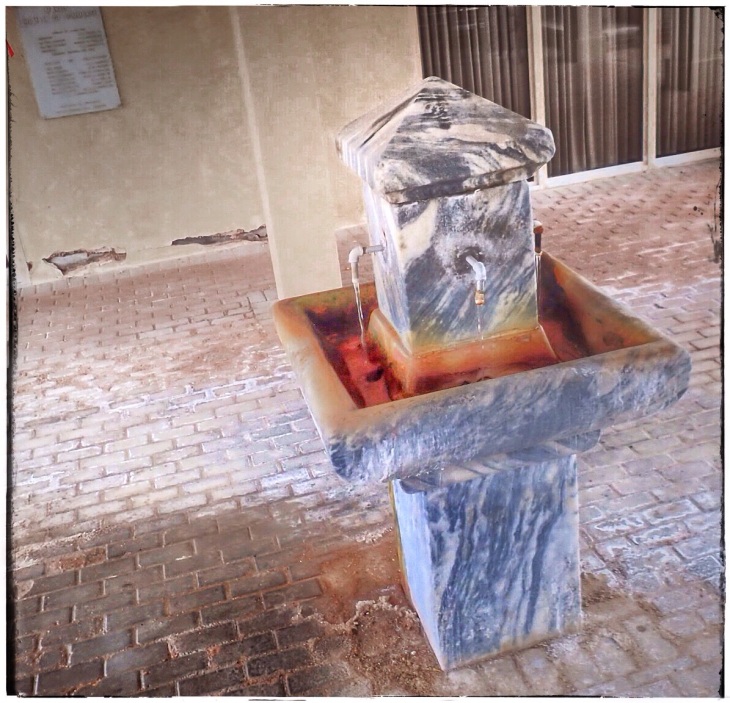 And yes. The water is warm. And yes. The water stinks. I can’t vouch for how it tastes because the kids were too chicken to taste it, and, well… there’s three of them and only one of me. Plus, I heard that drinking the sulphur water makes you poop, and, well, we were over an hour from home…. so… better them than me.

Kinda sucks that there hasn’t been a rich entrepreneur looking to invest in an historic little town. The crunchy granola alternative health market just might line up for some 19th century nostalgia and turn of the century medical cure-alls. Too bad. I’ve got a girls weekend on my calendar in January, and a weekend of sulphur rich balneotherapy, promenading, and repetitive quaffing of foul-tasting water might be just what the doctor ordered. 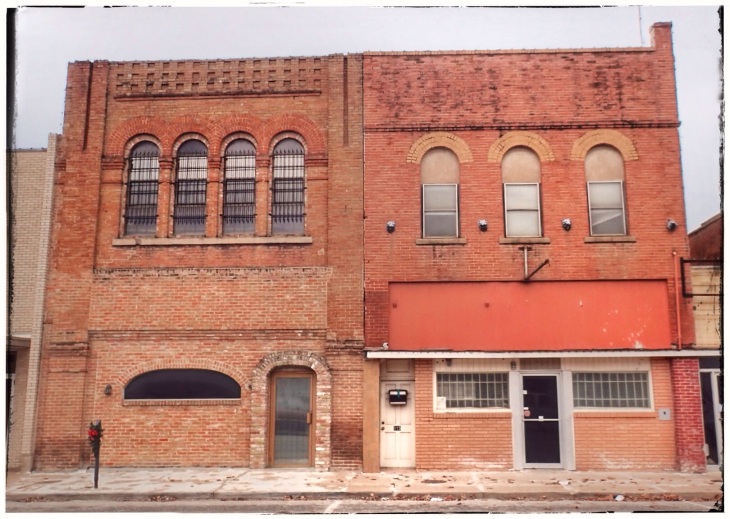